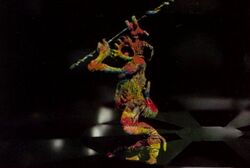 Star Wars
Monnoks are dangerous desert predators on the planet of Socorro which survive primarily off a diet of Druyza and Mutriok meat. Mostly found around the Rym Mountains and Doaba Badlands, they are intelligent enough to create spears, clubs, and other simplistic tools, but are not believed to have created a true language as of yet in their evolutionary history.

They are respected by Socorran nomads for their hunting prowess and considered a sign of the beginning of a dangerous but greatly rewarding journey when sighted by a smuggler. However, they are most famous for being represented as one of the many holomonster playing pieces in the board game of dejarik.