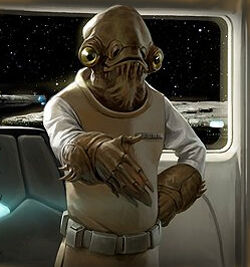 Star Wars
The Mon Calamari, also known as Calamari, Calamarians, Mon Cal or Mon Calamarians, are one of the five known sapient species indigenous to the water planet of Dac, alongside the Quarren, the Moappa, the Whaladons, and the dreaded Amphi-Hydrus.

Mon Calamari are fish-like, amphibious organisms notable for their domed heads, webbed hands, and large eyes. They were also notable for their minor sexual dimorphism, with males possessing fleshy protrusions from their chins called barbels which grew more numerous with age. Most of their species had salmon-colored skin that was often mottled with light and dark patterns to give it a more reddish-brown hue, but other skin tones were known to exist, as well.

Mon Calamarian hands were not only webbed to provide better maneuverability in their watery home but also possessed five claw-tipped fingers; one opposable thumb with two more shorter claw-like protrusions, two long middle fingers, and two extremely short outer fingers; this could indicate that they somehow evolved from land-dwelling organisms, as usually limbs will melt away into paddles for the best steering control over time. They also had suction cup-like holes in their palms.

Perhaps one of the most remarkable features of the Mon Calamari was their eyes. These eyes could swivel independently from one another, allowing them to focus on two areas at once. They also perceived different wavelengths than Humans, making it difficult for one species to view visuals designed for the other and vice-versa. Due to their size, they are often used to express emotion: staring with the left eye was a way of showing surprise, while staring with the right eye was either a challenge to fight or an expression of love, depending on the circumstances.

Being an oceanic species, a Mon Calamarus can stay underwater for long periods of time. However, the Mon Calamari do have lungs, an indication of terrestrial origins. Mon Calamari are capable of descending to depths of 30 meters below sea level on a single breath of air, although they often find gill breathing more comfortable for deeper dives. Frightened Mon Calamari, especially juveniles, have been known to drown.

Due to their overall fish-like appearance, Mon Calamari are sometimes somewhat derogatorily referenced in the deal-slang expression, "Mon Cals in a fishbowl", which refers to the act of making several big and easy deals from naïve or less-than-intelligent clients.