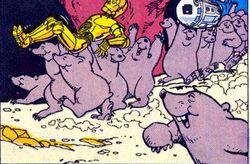 Star Wars
These "Mole Creatures" (the real name of this species - in case they have one - is unknown) are poorly known, sapient beings which inhabit the underground of planet Tatooine. When a surface creature or robot falls into their tunnels, the "Mole Creatures" feed these intruders to an Acid Lizard.

Although it is possible that they are not aware of this, the "Mole Creatures" share their homeworld with two way more well-known sapient beings: the Jawas and the Tusken Raiders (also known as "sand people"). All three of these races are rodentoid in appearance, and it is known that Jawas and Tusken Raiders do share a common ancestor: they are both descendants of an ancient race called Kumumgah. It is possible that the "Mole Creatures" represent an obscure third lineage that went to the underground. This is nothing but speculation, though, and has never been confirmed (nor denied) by official sources.