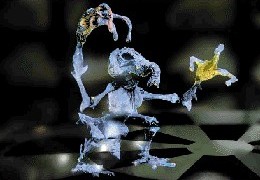 Star Wars
Molators are creatures from Alderaanian mythology. They were said to use their magical powers in order to protect the Alderaanian royalty. They had a hoary, almost regal look about them and moved about on insectoid legs. Due to the obliteration of Alderaan, this mythical species is considered "extinct".

They are most notable for being represented as one of the many holomonster playing pieces in the board game of dejarik, in the form of Grimtaash.