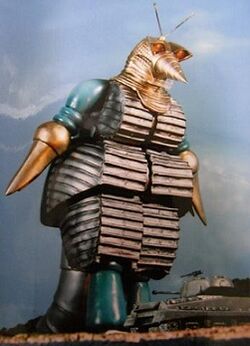 Godzilla
Moguera (モゲラ, Mogera) is a giant robot mole used by the Mysterian aliens to conquer the Earth.

Moguera was sent to Earth by the Mysterians to conquer it. It first arrived in a small Japanese village, which it destroyed. Moguera continued to rampage through the countryside, shrugging off all attacks by the military. The military eventually rigged a bridge with explosive charges and waited for Moguera to cross it. When Moguera tried to cross the bridge, the charges were detonated and Moguera fell into a ravine below and exploded.

Later, when the Mysterians had begun their full invasion of Earth, they unleashed a second Moguera to attack the Earth Defense Force's units. Moguera burrowed up from underneath a Markalite cannon, which fell on top of it and destroyed it.

Moguera is designed as a war machine, boasting impressive firepower and thick armor, but slow movement. Moguera can emit high temperature from its body, fire destructive laser beams from its eyes, and burrow underground.

Retrieved from "https://aliens.fandom.com/wiki/Moguera?oldid=163873"
Community content is available under CC-BY-SA unless otherwise noted.