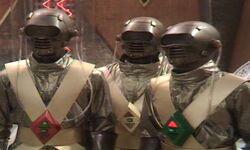 The Mogarians are a sapient humanoid species native to the planet Mogar in the Perseus Arm of the Milky Way Galaxy.

Their natural appearance is that of a gold-skinned humanoid with a number of parallel vertical slits in the place where the mouth would normally be. However they are most commonly seem wearing spacesuits when off-planet, as free oxygen is lethal to their metabolism. They also use translator devices to communicate with Humans. Liquid water can be fatal to them as well, although they are seemingly able to consume tea.

Mogarian culture is known to abhor war and violence, to the point that in the 30th century they openly allowed humanity to exploit the rare mineral resources of their homeworld. Some individuals of the species have proved themselves far less peaceful than the others, however, and are willing to go to great lengths to return to Mogar what they believe is theirs by birthright.

Retrieved from "https://aliens.fandom.com/wiki/Mogarian?oldid=185882"
Community content is available under CC-BY-SA unless otherwise noted.