Alien Species
Register
Don't have an account?
Sign In
Advertisement
in: All Tomorrows Universe, Descendants of Man, Sapient Species,
and 7 more 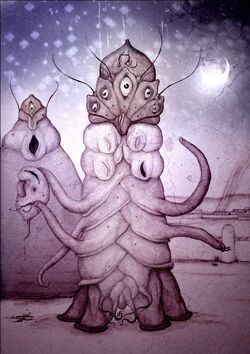 Evolved from the Colonials

Nemo Ramjet
The Modular People were a posthuman species of cell-colonies that evolved from the Colonials.

Eventually, the Modular People built industrialized mega-cities. Every "individual" was a colony formed from groups of different Colonials, with each colony being designed for their purpose. Also, they could split up and form new individuals from their "cells". The only thing constant in all of their protean existence was their mental and cultural unity.

Modular People society was an utopia of equality where everybody was happy to be a part of the whole.

They belonged to the second wave of posthumans joining the Second Galactic Empire founded by the Killer Folk and the Satyriacs.

Though they were prepared to face an alien invasion, the Empire didn't think about an invasion from other posthumans, and so the Modular People, along with all of their cousins, were quickly wiped out by the Gravital as part of their interstellar conquest.