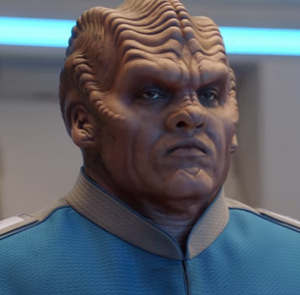 The Orville Universe
The Moclans are an alien race that appear in The Orville (TV Series).

The Moclans are a single-gender humanoid race. They are male. Molcans possess light brown skin, their distinctive features are their cranial ridges that run along the sides of their head and at the center. Their urinary system is interesting seeing as they urinate once per year. Despite being a single-gendered species, Molcans do take mates. They reproduce by laying eggs, the gestation period requires the parent to sit on it until it hatches, which is exactly 21 days.

While they are declared as a single gender species, a female Moclan is born, on rare occasions, every 75 years. Due to the harsh conditions of their planet, the Moclans are able to absorb nutrition from a wide variety of organic and inorganic matter.

On the rare occasions when a Moclan is born a female, the parents will order a sex change operation to convert the gender to male. While seemingly unethical to human prejudices, it is seen perfectly justifiable to the Moclans and view the conversion as necessary, believing that being female is a handicap.

Retrieved from "https://aliens.fandom.com/wiki/Moclan?oldid=168067"
Community content is available under CC-BY-SA unless otherwise noted.