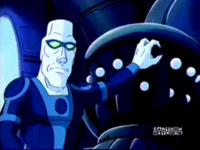 Jonny Quest Universe
The Moai were a race of aliens that appeared in the Real Adventures of Jonny Quest.

The Moai were a short humanoid race, their faces were the base for the monoliths on Easter Island. They were blue skinned and had three digits for their hands and feet. Compared to humans, the Moai possessed a large cranial space, as well as a large nasal cavity and lack of ears. Moai seem to have triple-helix DNA. According to Dr. Benton Quest, the nasal cavity may be a sound chamber, and added with the Moai's hollow bones, creates a distinct musical note if struck.

Unique about these aliens biology was that their bones possessed apparent evolutionary applications through harmonics.

Thousands of years ago a stray Moai came to Earth and conducted DNA altering experiments on Easter Island creating the missing link of humanity.

Unfortunately while conducting its experiments on its latest subject, its vessel was covered by lava from an erupting volcano. The alien died along with it's specimen.

Its ship was recovered by Quest Enterprises, who uncovered the evolutionary and scientific find. After Jeremiah Surd learned of its discovery and the DNA altering technology of the Moai, he arrived with his men and stole it. Surd abused the technology converting Dr. Quest and Race's minds into savages. However the Quest team managed to decipher the Moai's language and send out a signal to its people.

The Moai arrived to undo the damage that their existence caused. In addition they destroyed all evidence of themselves, and wiped the memories of the parties involved on Easter Island.

They possessed Rongo Rongo tablets, with a language based on musical notes.

Dr. Quest theorized that the Moai used their evolutionary adaptations to develop technology that advanced transgenetic technology based on sound. As proof, using a skeleton of a Moai and playing the notes made by the bones. Once the bones resonate, as do the huge moai statues across the Easter Island. Once the resonance ends the sound was noted to have altered the DNA of the grass around the statues. They operated vessels that were made into perfect spheres, a feat only capable in zero-gravity. In addition they possessed technology that could alter memories.

Retrieved from "https://aliens.fandom.com/wiki/Moai?oldid=174497"
Community content is available under CC-BY-SA unless otherwise noted.