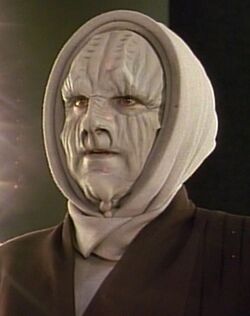 Michael Westmore
The Mizarians are a sapient humanoid civilization from the planet Mizar II. They describe themselves as a highly intelligent and unaggressive race, and are notable for their complete passivity in the face of conquest.

Mizarians are hairless humanoids and can be distinguished by their wrinkled skin, which is greyish lavender in color.

Preferring peaceful submission to confrontation, Mizarians claim that they have survived several consecutive invasions due to not offering any resistance to their conquerors. From the 21st through the 24th centuries, Mizar II has been invaded no less than six times and the Mizarians still failed to fight back. For this reason, they believe that their race has no enemies. The Chalnoth, however, seem to be disgusted by this attitude and consider them a race of cowards.

Retrieved from "https://aliens.fandom.com/wiki/Mizarian?oldid=125555"
Community content is available under CC-BY-SA unless otherwise noted.