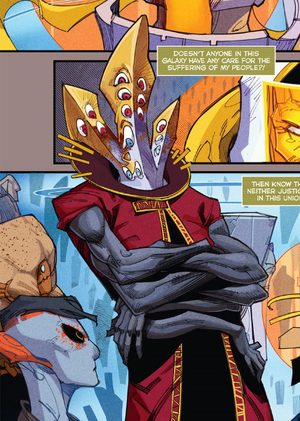 The Mito are a alien species from the Meteora Comic Series.

The Mito are an asymetrical race, one representative possessing a head that was spilt into three trapezoidal parts with numerous eyes in varying colors. Also they appear to be bipeds, sporting at least six arms.

One member of this species holds a seat on the Galactic Council of the Union of Justice and Order. It rejected King Gaudin II's appeal to lift the blockade over his homeworld.

Retrieved from "https://aliens.fandom.com/wiki/Mito?oldid=173022"
Community content is available under CC-BY-SA unless otherwise noted.