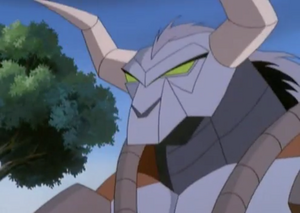 The race appeared as large Humanoids that were encased in a form of armour. Their heads resembled that of a bull with three digits on their hands as well as a long mane of hair. When they spoke, their helmet gave them an echoing mechanical sound. They also possessed hooved feet.

The Minotauri were an interstellar race of warriors that lived as bounty hunters that sold their services to the highest bidder. At some point in their history, they waged a major war against the Banshee. A conflict that the Minotauri lost and the race became imprisoned in a form of natural stasis. Their involvement in the Human race spawned the legends of the Minotaur.

Centuries later, the Banshee Queen Mab would free two of the Minotauri and unleash them in order to kill one of their kind who they considered a traitor. The victor would be allowed their freedom though they failed in their designated task.

They were known to enjoy the experience of hunting their targets which they did so through the use of advanced weapons that doubled as melee blades. They also made use of a shield and anti-gravity platforms that allowed them to fly in the air. Certain types of armour were also capable of shooting out chains which would wrap around their target in order to better capture their prey.

Minotauri Bounty Hunters made use of Cerberus Parahounds during their hunts in order to better track their prey.

Retrieved from "https://aliens.fandom.com/wiki/Minotauri_(Rosswell_Conspiracies)?oldid=189289"
Community content is available under CC-BY-SA unless otherwise noted.