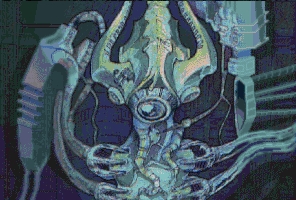 The Minions are a species of artificial life - machines that serve the purposes of their extra-galactic master-species. Eons ago, the master-species seeded the ancestor-units of the Minions on a planet chosen to accelerate their developmental programs. Their ultimate programming lay dormant throughout their history until reawakened by their cosmic masters. No one knows anything about the location of the masters or their purpose.

The Minions are made up of microscopic, self-maintaining machines, and they are able to assimilate other lifeforms to obtain the rich mixture of elements they need for power and self-maintenance. They are efficient and unstoppable at taking over worlds. They are built for strength and speed, and no known species can stand against a Minion in unarmed confrontation. They infiltrate, assimilate, and control worlds with great speed and have been known to take over an entire planet and population in hours.

Your ancient programming has been reactivated. You are the central control unit. You must coordinate the efforts of the Minions to develop the technology of space travel and spread throughout this galaxy.

The Minions have detected transmissions from other stars. Analysis of these transmissions indicates that some have an aggressive nature. Eliminate threats to the Source World.

Supreme Planet Invaders: The Minions are masters of invasion. Your planetary invasions will always succeed.

Retrieved from "https://aliens.fandom.com/wiki/Minion_(Ascendancy)?oldid=160968"
Community content is available under CC-BY-SA unless otherwise noted.