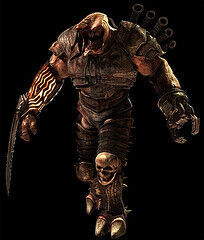 Hellgate: London Universe
Hulking, brutish creatures with a disturbing mouthful of razor-sharp teeth for a head. These demons have been tagged with the nickname Minions because of their deployment as the shock troops of the underworld. Minions employ demon-crafted weaponry that attaches directly to the ends of their arms, replacing their hands in some cases. From an assortment of wicked melee weapons to a variety of ranged armaments, a group of these demons can make patrolling London an extremely dangerous endeavor.

Certain Minions have rigid leather straps protruding from their shoulder armor. Long lengths of chain can be attached to these straps, allowing the Minion to keep control over several smaller beast-caste demons...or worse. Also, as True Demons, Minions are sometimes overheard speaking amongst themselves. A few have learned human speech, and to hear them calling out to their prey is not for the weak of heart.

There are at least two variations of Minions:

These are the formidable front-line fighters in the demon army. Their forearms have been augmented with massive spikes, allowing them to punch through the thickest mundane armor with ease. They are incredibly strong, delivering a crushing, crippling blow with each swing of their massive arms.

The metallic clamps that have replaced the hands of these creatures serve not as grappling devices, but instead provide a conduit and focus for eldritch electrical energies. The Shock Minion can channel this energy into balls of lightning which are then fired across great distances, or both claws can be struck together, causing a massive shockwave that damages enemies that have come too close or surrounded the demon.