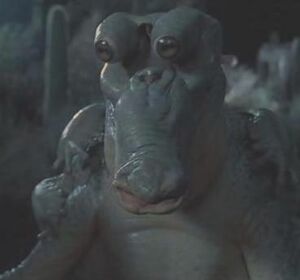 Mikey is an alien criminal who had been hiding out on the planet Earth. He is the minor antagonist in Men in Black.

He is an alien creature with an amphibian/reptile look, strong forelimbs and flipper-like organs on his back; a short quasi-tubular mouth and mobile eyestalks. Though not particularly frightening at first sight, his mouth can open to reveal sharp, deadly fangs and he has displayed aggressive behavior. He has a strange voice while making sounds and his body fluids resemble blue-colored slime.

Hardly anything is known about Mikey's background. He was living illegally on Earth and has been imprisoned at some point, putting the Men in Black on his track. He has disguised himself as a Mexican immigrant in spite of the fact that he cannot understand the Spanish language. Dialogue suggests that Mikey has broken several interplanetary treaties and was involved with the notorious Nazca Lines. At first MiB agents D and K attempted to arrest Mikey, but when he tried to attack a Human named Janus, they are forced to shoot him, destroying him in an explosion of blueish goo.

Appearances in other media Edit

Retrieved from "https://aliens.fandom.com/wiki/Mikey_(Men_In_Black)?oldid=180408"
Community content is available under CC-BY-SA unless otherwise noted.