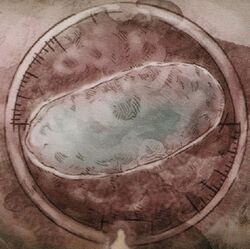 George Lucas
The Midi-Chlorians are a sapient species of microscopic symbionts which inhabit the cells of all living (organic) creatures and allow them to be connected to the Force. According to Jedi Knight Qui-Gon Jinn, life couldn't exist without the Midi-Chlorians. The Jedi further claims that they "continually speak" to their hosts, communicating the Force's will, and allowing those who are capable of listening to them to unlock the innate powers of the Force.

It is believed that the concentration of Midi-Chlorians within one's cells is related to one's sensitivity to the Force. For this reason, the Jedi would analyse blood samples from Force-sensitive individuals to determine their Mini-Chlorian count. The highest count ever observed was in Anakin Skywalker, a Human boy who was conceived without a father, leading the Jedi to speculate that he might have been conceived by the Midi-Chlorians themselves as the prophetic "Chosen One", destined to restore balance between the light-side and the dark-side of the Force.