"...Crustaceous bodies bearing vast pairs of dorsal fins or membranous wings and several sets of articulate limbs, and with a sort of convoluted ellipsoid, covered with multitudes of very short antennae, where a head would ordinarily be." - H.P. Lovecraft

The Mi-go, or "fungi from Yuggoth", are pinkish fungoid crustacean-like organisms with wide, fan-like wings. It has six main limbs and a wrinkled head which can change color. The fungi communicate by rapidly changing the color of their heads, and project multicolored beams of light to communicate over long distances. There are many subspecies of Mi-go, and they all cooperate without difficulty. They are skilled at body modification, often altering organs and body structures on a whim. Their mentality is very different from humanity's, and it is nearly impossible for humans to understand these creatures.

The Mi-go often transmit human brains from Earth to Yuggoth by using metal cylinder containers called brain cylinder designed to keep human brains alive despite being disembodied. The use of these brain cylinders is the reason why the Mi-go have an extensive knowledge of brain surgery with their ability of body modification.

The Mi-go arrived on Earth during the Jurassic period, fighting off attacks from the Elder Things and eventually settling in the northern hemisphere. They have gradually lost terrain, and today they inhabit the Andes, Himalayas, and Appalachians.

an artist's interpretation of a Mi-go 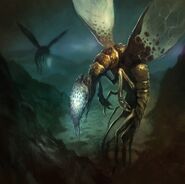 Add a photo to this gallery
Retrieved from "https://aliens.fandom.com/wiki/Mi-Go?oldid=136845"
Community content is available under CC-BY-SA unless otherwise noted.