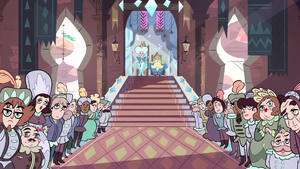 Star vs. the Forces of Evil

Mewmans are a sapient race of humanoids from an inter-dimensional island known as "Mewni".

In the episode "Mewnipendence Day," Star recreates a battle that happened between the Mewmans and the monsters centuries ago. Initially, years ago, the Mewmans arrived to the land that would eventually be named Mewni. However, monsters already lived in this area, and this lead to a war between the opposing sides that lasted for years. This lead to the creation of a magic wand which the queen used to transform peasants into mighty soldiers. However, Star realizes that this war was most likely a genocidal campaign against the monsters who were relatively peaceful before the first Mewmans arrived.

The Kingdom of Mewni is ruled by an absolute monarchy known as the Butterfly family. According to the canonical guidebook Star and Marco's Guide to Mastering Every Dimension, the royal family is matrilineal meaning that the queen would have more power and authority, and would pass that right down to their firstborn daughter. There is also a definitive divide between classes of Mewmans with the upper class living in castles while the impoverished Mewman peasants live subpar lives.

As for Mewman society, it seems to have developed in a style of the 15th and 16th century Europe. Most Mewmans have some knowledge of other dimensions such as Earth, however, the Earth's customs tend to be completely alien to them.

The Mewmans are noted for their firm dislike of monsters that most likely started sometime during the war. For instance, King Butterfly used fireballs to drive some monsters away when they tried to take the kingdom's corn. However, it was shown that the royal family was willing to negotiate a peace treaty with the monsters. Unfortunately, this plan did not fall through after the Immortal monster, Toffee, went rogue and gathered a great sum of the army for his own interests. Their intolerance in monsters was so great that when Queen Eclipsa Butterfly ran away with a monster king, not only was she demonized, but her daughter, Meteora, was passed over because of her being half-monster. Meteora would eventually establish St. Olga's School for Wayward Princesses, having renamed herself "Miss Heinous."

Mewmans resemble humans greatly with a few distinct differences such as possessing wings. Mewmans also go through a phase of puberty known as "Mewberty." For the females, Mewberty is manifested within them by developing more insectoid attributes such as additional hands. This metamorphic process tends to last for a few hours. The Butterfly family is noteworthy as most of the family line possess marks on their cheeks that change regarding their emotions. These markings can appear as card suite symbuls like hearts, diamonds, spades and clubs among other more elaborate marks like lightning bolts and infinity symbols among others

Retrieved from "https://aliens.fandom.com/wiki/Mewman?oldid=184868"
Community content is available under CC-BY-SA unless otherwise noted.