Alien Species
Register
Don't have an account?
Sign In
Advertisement
in: Articles that Need to be Rewritten, Metroid Universe, Characters,
and 2 more 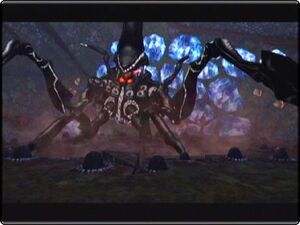 Metroid
Metroid Prime was a heavily mutated Metroid that lived in the Phazon core of Tallon IV.

It is unknown where Metroid Prime originally came from. What is known is that a Phazon meteor struck the planet Tallon IV and in Chozo lore, it says that along with the Phazon came The Worm (the Chozo name for Metroid Prime) However, it is also possible that Metroid Prime was already an inhabitant of Tallon IV, and was "chosen" by the Leviathan to serve as its guardian after it crashed. Whichever the case, the Metroid in question ultimately became hideously mutated by Phazon, and the Chozo sealed resultant monstrosity inside the Impact Crater from which it came, and it remained hidden there for many years. Metroid Prime is believed to be one of the main causes of the Chozo extinction on Tallon IV, along with the Phazon it created.

When Samus Aran engaged Metroid Prime, she damaged it extensively, to the point where it was forced to shed its exoskeleton; this core form of Metroid Prime was a huge, floating, ethereal creature with membranous composition, six long tentacles and - most disturbingly - a humanlike face with no features save a pair of glowing red eyes. In this form, Metroid Prime could spawn regular and mutated Metroids, and was impervious to all weapons save one: Samus' Phazon Suit arm-cannon supercharged with phazon.

Death of the Metroid Prime[]

The core of Metroid Prime was weakened, and grabbed out at anything nearby. It grabbed onto Samus's suit, and began to pull her in. Samus fought against it, but Metroid Prime somehow removed the Phazon suit, leaving Samus in her gravity suit. The creature then started to expand and die, and while the impact crater collapsed, Samus escaped. (Metroid Prime)

Metroid Prime was not completely dead, however; it possessed Samus's Phazon suit, and took some of her DNA, using both to effectively construct a new body. This being eventually became known as Dark Samus. When Dark Samus came across Aether, another planet hit by a Phazon meteor that had been split into two dimensions of Light and Dark, she quickly found Phazon in Dak Aether and began to feed. It was here that she encountered Samus a second time; this time, she was quick to destroy the energy sphere protecting Samus from the Dark World's deadly atmosphere, then leave her to die.

Dark Samus went to the Sanctuary Fortress to feed on the Phazon there, and again encountered Samus Aran. By this time, Dark Samus was more powerful due to phazon consumption, and severely angry at Samus. She engaged Samus Aran on an elevator platform, and demonstrated new abilities such as an improved charge shot. Samus severely weakened and almost killed Dark Samus; however, her dark double fell off of the Sanctuary Fortress to apparent suicide before Samus could finish her off.

After Samus defeated the Phazon-mutated Emperor Ing, blue particles appeared where he used to be, suggesting Dark Samus was inside the Emperor Ing. Dark Aether began to collapse without any energy to sustain itself. When Samus left the Sky Temple and attempted to leave Dark Aether, she was confronted by Dark Samus. By this time, Dark Samus had absorbed so much Phazon that she was dangerously unstable. In this form, Dark Samus showed severe physical deterioration, with her armour having become translucent, revealing her vein-like internal organs and mouthless, skull-like face that resembled that of Metroid Prime's core form with a third eye. Dark Samus was invisible to Samus's Dark visor, one of the contributing factor's to her last defeat. Dark Samus, due to her Phazon mutation, grew more combat powers, such as the ability to create a phazon force-field around her.

With this force-field, she was impervious to all weaponry except one - a Phazon charge beam. Dark Samus vented out Phazon particles in frequent intervals, and these could be absorbed by Samus' Power Beam and used to damage Dark Samus. Dark Samus was weakend and fell to the floor. She slowly walked towards Samus, trying to touch her, but split into her particle form, which faded away. Samus then escaped and Dark Aether was destroyed.

Dark Samus was not destroyed, however. Above Aether, blue particles came together, forming Dark Samus once more. (Metroid Prime 2: Echoes)

Metroid Prime was a major source of pollution and suffering on Tallon IV, as it was able to produce Phazon, which mutated the wildlife and poisoned the environment. Space Pirate log entries detail the evolution of Metroid Prime via phazon exposure from a weaker creature to its arachnid-like form, which exhibits armored plating and mechanical outgrowths capable of generating defensive screens. The creature could shift these screens to protect itself against new weaponry. However, through a genetic flaw, it was vulnerable to one energy type at a time. This flaw is believed to be rooted in the fact that Metroid Prime's weapons are based on four elements including power, wave, ice, and plasma, and cannot fire them through a screen that disallows penetraton by that beam type. Metroid Prime, according to log entries, is capable of assimilating mechanical weaponry into its body — weapons presumably collected during the creature's encounter with the Space Pirates.

Metroid Prime without its exoskeleton was still very powerful, and was impervious to all weaponry except a phazon charge shot. With its tentacles, it could create a circular field of fire that would expand outward, damaging anything nearby. It could produce pools of phazon to damage nearby creatures, and disappear from visual, thermal, or x-ray fields of vision. Somehow, it gained the ability to create Metroids, as well as Phazon variations of them. When Metroid Prime was defeated, it attempted to grab at anything in the area, including Samus, presumably in a desperate attempt absorb Phazon to sustain itself, and took her Phazon suit in the progress. Somehow, out of the pool of Phazon it degenerated into, it turned into Dark Samus.

Dark Samus seems to be on an everlasting search for Phazon. It is unknown why she needs Phazon, although it is possible she needs it to sustain herself. Dark Samus herself is pure Phazon and Samus Aran's DNA, along with the suit taken from Samus. Dark Samus has the ability to turn into blue particles, presumably of Phazon. It has been shown that too much Phazon absorption results in instability, in which she needs to vent Phazon. To kill Dark Samus, Samus Aran had to use several hyper mode attacks, such as the hyper beam and hyper missile, to destabilize Dark Samus. This led to the destruction of the planet Phaaze and supposedly Dark Samus herself.