Alien Species
Register
Don't have an account?
Sign In
Advertisement
in: Ben 10 Universe, Herbivores, Races of the Milky Way Galaxy,
and 11 more

Methanosians are humanoid plant-like aliens taller than Humans with a red flame-patterned head, root-like feet seemingly holding black rocks, pointed oval-shaped eyes ending with pupils copying the shape but in a smaller size, red and yellow petals on their shoulders and heads, four or five-fingered hands, and green frills sticking out of their elbows and legs.

During their first stage of "blossoming", Methanosians look mostly the same except they become more muscular, the lines on their necks have thinned, and the lines on their chest have moved upward into a pointed-down angle. They lose their pupils, one of their shoulder petals, and one of their leg frills. Their fingers are more claw-like than before.

During the second stage of "blossoming", Methanosians become even more muscular, their red petals form a thorn-like shape, and the lines on their necks become triangular. They lose the lines on their chests, their remaining leg frills, and another of their shoulder petals, yet gain two petals on each forearm and thorns on their feet. Their hands become black and their fingers become two different shades of yellow. Their faces are colored red, yellow, orange, and black. They also have large collars raised up around their necks that are yellow on the inside and the same color as the rest of their skin on the outside.

"Blossomed" Methanosians are even more muscular and taller than before, their faces no longer have black parts over the eyes, their chins are more visible, they gain thorns on their knees and elbows, and their red petals have yellow spots that evoke flames.

Methanosians can generate and blast flames of varying heat and intensity that are powerful enough to harm Vaxasaurians and Sonorosians. This is accomplished by breaking down rotting plant matter in their stomachs and igniting the methane in their hands similar to a flamethrower. After their "blossoming", their fire powers become more powerful and can be activated by igniting methane from holes in their palms.

Similar to Pyronites, Methanosians are capable of limited flight through means of launching fire from their palms as jet propulsion.

Similar to Florauna, Methanosians are capable of different feats of chlorokinesis,[1] such as telepathically interface with plant life, manipulating biological agriculture of their creation, and sprouting vine-like tentacles from their backs.

After their "blossoming", a Methanosian's chlorokinetic abilities are modified so that they can grow plants by simply raising their hands and control sentient plant life. They can also generate flame-tipped vine-like whips that can slice through the plasma generated by Insectoids.

Methanosians can generate seeds from their bodies that phase into or pierce into any surface before turning to vine tentacles strong enough to restrain Atasians and Chimera Sui Generi.

A Methanosian's body can generate a type of mud that sticks to everything but them, which is affective in blinding Vaxasaurians.

Methanosians are capable of multiple forms of regeneration, including reattaching severed limbs, filling up holes in their bodies, growing back decapitated heads, and even reforming their body from remains when splattered to pieces. Their regeneration can be passed onto other beings.

A Methanosian's methane has a very pungent and swampy stench that is intolerable and repulsive to other beings. For example, the smell makes Incurseans retch and faint.

Methanosians are strong enough to push down a large Highbreed weather array, resist the gravitational force of a Null Void portal, and fight on-par with a Chimera Sui Generis of Vilgax's power level. Their natural strength increases as they "blossom".

Mathanosians can extend their fingers and feet into long roots that can dig through rock.

Methanosians can jump exceptionally high. They also have strong teeth capable of injuring another Methanosian.

Methanosians possess enhanced durability, as laser bolts feel like tickles to them. This natural durability can be amplified as they "blossom" so they can take more hits.

Similar to Pyronites, a Methanosian's fire attacks can be canceled by water or fire extinguishers. They are also ineffective against a Chimera Sui Generis or a containment suit worn by a Prypiatosian-B.

Methanosians can be temporarily immobilized by ice, such as a Necrofriggian's ice breath, until they thaw themselves using their fire powers.

Methanosians are vulnerable to electricity, such as a Conductoid's attacks.

Methanosians can be affected by magic, as such an attack can leave their backs scorched.

Like other organic beings, Methanosians can be aged to dust by the time rays of a Chronosapien or Chronian.

Methanosians can be easily overpowered by a Galilean's gravity powers.

Planets controlled by Methanosians can be killed by certain chemicals.

A Methanosian's body heat can make it difficult for them to fight reptiles and other opponents that are attracted to heat.

Prior to their "blossoming", Methanosians are unable to control sentient plants let alone weeds.

Methanosians have stuffy voices because they do not have noses. However, they do possess a sense of smell.

Methanosians are descended from carnivorous swamp plants, but evolved into plant-like herbivorous humanoids at some point in their evolution. 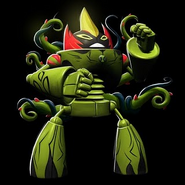 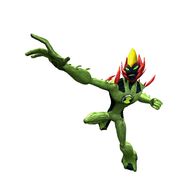 Swampfire during the 1st stage of his metamorphosis

Swampfire during the 2nd stage of his metamorphosis

Swampfire after undergoing his metamorphosis