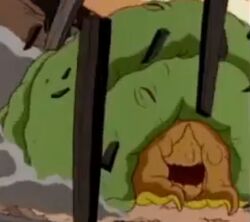 Men in Black
A Metaphite is a gigantic grub-like alien organism which grows inside a cocoon for 130 years before emerging.

Metaphites are described as being like a living, breathing nuclear reactor, burning up bio-fusionable reserves and producing high levels of radiation; enough to render the atmosphere of an entire planet inhospitable for other life forms.

Metaphites are used by a race of nomadic aliens called Vexrons to xenoform Earth-like planets and turn them into radioactive wastelands which only the Vexrons themselves can thrive in.

A Vexron agent is tasked with finding a suitable location for and guarding the Metaphite cocoon during its maturation period of 130 years (which isn't terribly long for a Vexron, as they live for nearly a millennium).