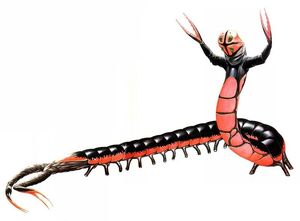 Mission of Gravity and related works
The Mesklinites are a race of small, physically tough centipede-like creatures with a methane-hydrogen biochemistry and native to the oddly-shaped planet Mesklin.

The Mesklinite body is shaped like an elongated cylinder with eighteen pairs of short, insectile legs as well as front and rear pairs of pincers used for manipulation and gesture. The body is about 35-40 centimeters long and five in diameter. Their skin color is red and black, forming individual patterns that help them recognize each other. Mesklinites are omnivorous. Despite their diminutive size they are the largest terrestrial creatures on Mesklin's polar region, due to the enormous gravitational pull that exists there. In the poorly explored equatorial zones there are tribes of Mesklinites that grow over three times as much as their temperate cousins, but it is currently unclear whether these are a distinct species, subspecies or simply an ethnic subgroup.

The Mesklinite homeworld is a most peculiar one: a huge terrestrial planet with such a high rotation speed that its days are merely 18 minutes long, and a highly eccentric orbit around a binary star system. As a result, Mesklin's gravity varies widely, from more than 200 Earth Gs at the poles to "only" 3 Earth Gs at the equator. The Mesklinite physiology is naturally able to cope with this, making them exceptionally strong, durable an adaptable by Human standards.

Mesklin has cold methane oceans and a hydrogen-rich atmosphere. Accordingly, the Mesklinite metabolism uses methane in place of water, which then reacts with the hydrogen they breathe. Vegetation on Mesklin uses sunlight to build higher, unsaturated hydrocarbons, whilst animal life gets energy by reducing these compounds back to the saturated form using atmospheric hydrogen. It has been stated that the overall simplicity of the Mesklinite metabolism is the actual secret behind their long lifespan, durability and adaptability.

Mesklinites have no respiratory system, as their small size enables them to get all the hydrogen their bodies need through direct diffusion. In Lecture Demonstrarion, it is acknowledged that the Mesklinites have no blood, yet other sources suggest a complex circulatory apparatus with multiple hearts. One likely reason for this is that the liquid running in these hearts is so different from our own that it would be incorrect to refer to it as blood. Mesklinites can stay under-methane for extended periods of time thanks to being able to breathe the hydrogen dissolved there. If a Mesklinite runs too short of hydrogen, they will lose consciousness and their metabolism will slow down, but they will still remain alive for several hours and will be more likely to die from starvation rather than lack of air. Like most non-oxygen breathers, they consider oxygen a deadly toxin.

Having no respiratory apparatus, Mesklinites are able to speak thanks to an organ derived from a type of siphon which was used for under-methane propulsion by the Mesklinites' distant "aquatic" ancestors. The Mesklinite voice frequency is very broad, and they are able to communicate in frequencies undetectable by the Human ear.

Their bodies are protected by a thick but flexible exoskeleton. The head contains an insectoid mouth surrounded by four eyes. Despite relatively poor eyesight, they do have a great sense of deepness, which is useful due to their low-ground position. The front pair of pincers is used as hands, weapons and for gesturing, while the rear pair is more commonly used to anchor them to the ground when needed. The pincers are extremely strong, well able to cut through metal. However, the meat and tissues of all Mesklin lifeforms are also tremendously tough. Mesklinite lifespan is much longer than that of Humans or Drommians.

Being native to a high gravity environment, Mesklinites - excluding equatorial tribes- have a pathological fear of heights (acrophobia) and of being under things (claustrophobia). In spite of the violent weather of their homeworld, their houses are roofless and built close to ground. Furthermore their language lacks such words as "jump", "fly" and "throw" and they experience difficulty in understanding these concepts. Their weapons are limited to close combat ones such as knifes, clubs and others. Their technology lacks terrestrial vehicles and even their ocean vessels are shaped like large, segmented rafts. Some equatorial groups of Mesklinites have achieved a higher technological state, including canoes and even aircraft in the form of gliders, but both these are useless in the temperate and polar zones of the planet.

At the time of first contact with Humans, Mesklinites still existed as several independent cultures spread across the planet, with contact mostly limited to trading and with the most advanced groups seeing the others as barbarians. Mesklinites use no currency. Most traders are to some degree explorers as well. There are also philosophers, but their understanding of the physical world is very limited. Still, they have a strong scientific curiosity and are generally non-superstitious. When they first see Human technologies, they are puzzled by them, but instantly acknowledge them as machines, rather than magic or the work of gods. Nothing is known about their religious beliefs and it is possible that they don't have any. Under dangerous, problematic or merely annoying situations, Mesklinites tend to react more objectively than Humans. Very rarely will a Mesklinite feel worried, panicked or impatient. They have domesticated small creatures from their homeworld known as Ternees. They also use base eight for counting.

One of the many Mesklinite languages is called Stennish. Besides the variable voice frequency, they also heavily make use of pincers gesture in communication. One interesting factor that facilitates communication between different Mesklinite societies is that, as a result of their alien psychology and brain configuration, their actions and gesticulation are so directly tied in with the physical functioning of their bodies that the meaning, seen by another member of the same species, is automatically clear. They also have acute hearing and the ability to speak under-methane.

Retrieved from "https://aliens.fandom.com/wiki/Mesklinite?oldid=187248"
Community content is available under CC-BY-SA unless otherwise noted.