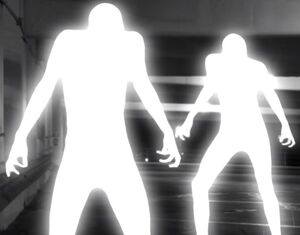 The Mercury Men
The Mercury Men are a sapient race of luminescent white humanoids, whose bodies are made of pure solid light. They can attack by shooting energy blasts from their hands and the helmets worn by their engineers suggest that they might have three eyes.

Although this species has evolved many ages before Humans, they've never developed space travel capabilities on their own, and the fact that Humans have managed to do so in such a relatively short period of existence makes them afraid of humanity, to the point of desiring their extermination.

A group of Mercury Men invaded an office building in Pittsburgh, Pennsylvania, in 1975, and nearly succeeded in using a gravity engine to pull the moon into the Earth to annihilate the Human race.

Retrieved from "https://aliens.fandom.com/wiki/Mercury_Man?oldid=197040"
Community content is available under CC-BY-SA unless otherwise noted.