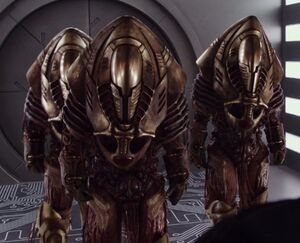 Luc Besson
Mercuries are a sapient, spacefaring alien race which made contact with humanity at some point after the Kortan Dahük did. Their appearance is unknown, as their bodies are hidden within large environmental suits which also conceal their faces.

Retrieved from "https://aliens.fandom.com/wiki/Mercury_(Valerian)?oldid=161148"
Community content is available under CC-BY-SA unless otherwise noted.