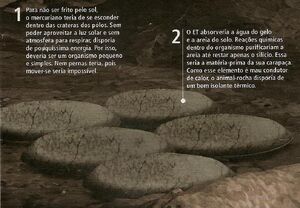 Superinteressante
Mercurians are silicon-based single-celled organisms indigenous to Mercury, the innermost planet of the Sol System.

They inhabit the deep craters near the north and south poles, the only places on the planet where water ice might be found. Hidden inside these craters, and thus unable to perform photosynthesis, Mercurians rely solely on water and minerals from the soil to live. They also have no air to breath, because their homeworld lacks an atmosphere. The shell that covers their bodies is made out of pure silicon, which, being a good thermal insulator, helps to protect the creatures from the extreme temperatures of the planet. A very simple lifeform, the Mercurian reproduces by binary fission.

Retrieved from "https://aliens.fandom.com/wiki/Mercurian_(Superinteressante)?oldid=182073"
Community content is available under CC-BY-SA unless otherwise noted.