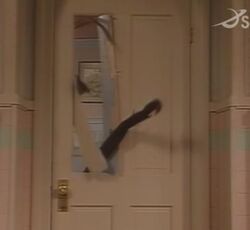 "That depends. Do you measure at the shoulder or the head?"

"Brian: Look it has blue eyes?
ALF: Naturally, it is a cockroach."
―Brian Tanner and Gordon "ALF" Shumway

The Melmacian Cockroach is a blue-eyed, non-sapient insectoid species which inhabited the planet Melmac, prior to its destruction.

Under normal circumstances, Melmacian Cockroaches are no larger than their Earth brethren. However, they can grow to enormous proportions when exposed to some types of chemicals, including insecticides. They're lethally vulnerable to at least some kinds of perfumes.

After Melmac was destroyed, a member of this species escaped to Earth along with Melmacian survivor Gordon "ALF" Shumway, in his spaceship. The specimen was christened "Rodney" by ALF and Brian; named after Willie's brother. However, after being exposed to bug spray, Rodney soon grew to enormous proportions and showed vicious hostility towards the Tanners and ALF, as they attempted to kill him. At the end, ALF managed to terminate the insect by spraying him with Kate's perfume.

It's not known whether other members of this species were found off-planet and survived Melmac's destruction. Since Melmacians are a space-faring race and there have been other survivors besides Shumway, the possibility can't be ruled out.