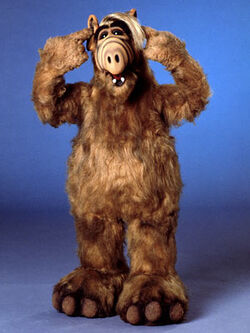 Paul Fusco
Melmacians are a species of short-statured sapients of mammalianoid evolutionary background. They are relatively long-lived, having a lifespan of around 650 years. By the inclusion of a plant called the Carl Shrub in their diet, Melmacians are also immune to infectious disease, awkward conversations, psychiatric conditions, the Jedi mind trick, dance fever, Jerry Williams, and stepping in gum. Should a Melmacian ever travel in time, he will inevitably stop a plane from crashing and inadvertently prevent a presidential scandal.

Since the planet was discovered on accident by Harold Twink 23,000 years ago, and it is assumed that Twink was also a Melmacian, the term "Melmacian" may in fact not be the true name of their species, in a similar manner to how a Martian or Venusian might not have evolved on Mars or Venus, respectively. Their species is widely considered one of the more awkward sapients in the known galaxy.

Melmacians are furry bipeds with dense, usually brown fur covering their entire bodies, except for their faces. They have large feet and four-fingered hands.

Their ears are triangular in shape and able to perceive sound in frequencies that Humans can't hear, such as that of a dog whistle. Their faces are dominated by a large snout, and they seem to have only four teeth.

Melmacians are omnivorous and are well known for enjoying virtually any kind of food, including things which are inedible for Humans, such as camera film and polyester. A Melmacian's favorite dish is Cat, although they also eat a lot of seafood. Their blood is green-colored and they have ten major organs in their bodies, eight of which are stomachs. Curiously, the Melmacian heart is located inside their ear. The Melmacian lifespan is fixed: they all die at the age of 650.

When a Melmacian eats excessively, they don't grow fatter like most species: instead, their bodies get denser. This is a naturally evolved trait that prevents them from becoming too big for their clothes. Eating enormous quantities of food might be extremely dangerous, as Melmacians are in risk of physical implosion. However, food regimens too must be taken carefully, because if a Melmacian spends too much time without eating much food, they will partially lose their sense of reality and start acting like a primitive hunter, searching for food in the wilds. This remarkable instinct most surely dates back to millions of years ago, when Melmacians were not a technological civilization yet.

Melmacians are susceptible to hiccups, which have a metallic-sounding echo to them. Some cases of Melmacian hiccups can be exceptionally severe, lasting up to 50 years if not treated properly. Known cures include cat juice and raw spinach. Cotton is considered an addictive substance to them.

It's possible that they are a physically tough species, as they have been shown to survive explosions and crashes which could kill or severely harm a Human being. 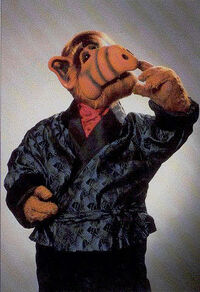 The exact location of planet Melmac is still unclear, but it's widely believed to be situated outside the Milky Way Galaxy. There are indications that it might be in the Andromeda Galaxy, whereas other sources simply say "six parsecs from the Hydra-Centaurus Supercluster". In spite of this, Melmacians have long known and explored the Sol System. As a matter of fact, there is evidence that they are not native to Melmac at all, but discovered the planet by accident after taking the wrong exit to Neptune. After the destruction of planet Melmac, two surviving Melmacians named Rick and Stella opened a tanning parlor on Mercury; while another one, Gordon Shumway, crash-landed on planet Earth.

Additionally, Melmacians seem to be well aware of the races native to the Sol System, including Humans, Martians and Jupertonians. They appear to have some sort of bullying relationship with Martians, as Melmac annually celebrated a holiday called National Rag on Martians Day. Other holidays included St. Melmac Day and Fappiano, which is similar to Earth's Thanksgiving. Although Melmacians are aware of the Human civilization on Earth, they have never expressed interest in making contact with Humans, possibly for considering them too "primitive" (Gordon Shumway was visibly offended when Willie Tanner described Shumway as being "almost Human").

Before their planet's destruction, Melmacians were a technologically-advanced, space-faring civilization, fully integrated in the galactic community. Melmac was once given the honor of hosting the Galactic Federation of Incredibly Strange Food Groups. It was not uncommon for Melmacians to visit distant parts of the galaxy when on vacation. In spite of this, it is possible that very few Melmacians were found offworld when the planet exploded. Gordon Shumway has even mentioned being the last member of his species in some occasions, although he later found out that some of his Melmacian friends are still alive and travelling in a spaceship.

Most Melmacians have a strong sense of humor and little responsibility, which is evident by the fact that the planet's motto was "Are you going to finish that sandwich?". There are some serious aspects in their culture, though. For example, Melmacians esteem books and believe that if you destroy a book you are stealing knowledge of the past from the future generations. A superstitious race, they believe that the one who destroys a book will have many years of bad luck, unless he asks for pardon in a ceremony under the green moon. In this ceremony, all guests must wear meat for clothes.

Melmacian norm dictates that a couple should not get married before having a child, which opposes to the Human norm of having children after, and not before, marriage. Melmacian funerals are typically a happy event, centered on celebrating the life of the deceased, rather than mourning their death.

The Melmacian God was called Barry. The planet's motto was "Are you going to finish that sandwich?". Melmac's national anthem was "Dance till you drop", by Homer T. Swipe, and the national flower was Roger, the turnip. During the holiday season, Melmacians dress up as vegetables and dance with their neighbors. Melmacians' favorite food is cats. Melmac had a huge liking for seafood and used it in sports activities such as "Bouillabaisseball". Melmac's one and only military was named the Orbit Guard and it took the duties of protecting Melmac from space, sea, land, and air. Melmac technology was very advanced; they had flying/hover cars, cyborgs, and light-speed space travel. The Melmacian education system accepts students into college for the standard 63-year enrollment period. 90% of Melmacians are under the height of 3 feet (0.91 meters). Their unit of currency is called Wernick and is roughly equivalent to $10.

Melmacian economy is based on the standard value of foam, rather than gold, and they've even had "foam rushes" in their history, similar to the gold rushes of Earth.

A group of Melmacians (Stella, ALF, Skip and Rick)