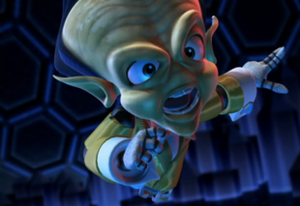 Tim Allen
Meldar Prime is alien celebrity and the seemingly charismatic host of the Intergalactic Showdown: a sadistic game show centered around abducting representatives from four different species and forcing them to compete against each other in a variety of challenges. The winning team is awarded with a space car and a chance to return to their world victorious, whereas the losing teams have their planets annihilated.

Physically, he appears just as a head attached to a robotic body without legs, which moves around by floating. His cufflinks serve as matrix generator devices that give him almost unlimited power over space, time, and reality itself, leaving him practically invincible and preventing contestants from turning against him.

When presenting his show, Meldar puts on a bombastic persona, which only hides a very sadistic side to him, as he delights in seeing the contestants lose and have their planets destroyed as a result. His main concern is guaranteeing that the show will be a success, and he's not above demeaning species that he considers inferior.

During an episode of Intergalactic Showdown, a Gorlock named April formed an alliance with a Human named Jimmy Neutron, intending to unite forces against Meldar and put a definitive end to his show, to prevent more planets being destroyed. Jimmy discovered the source of Meldar's powers, which consists of matrix generators in his cufflinks. Once they manage to remove them, Meldar was rendered defenseless and easily defeated.

Even before these events, Meldar acted particularly antagonistic towards the Humans (calling them "jelly bags"), as exemplified by him forcing them to vote off one of their team members (although it should be pointed out that, even then, they were still more numerous than the other teams), and preventing Jimmy's robotic dog Goddard from assisting him in the Obstacle Course. It's not known how much these acts reflect a genuine desire to enforce the rules of the show and how much they reflect Meldar's poorly-disguised wish to see the Earth destroyed.