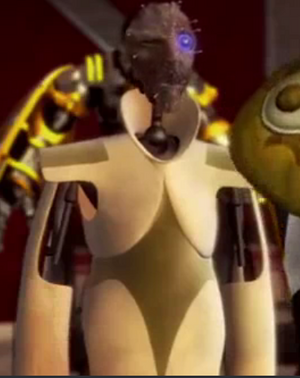 The Mekaneaks are a race of synthetic robots from Race.

They Mekaneaks resemble robotic humanoids, with faces that appear to be crudely plaster onto their face frames.

Apparently the Mekaneaks were created perhaps by humanity to serve as excavators on the planet Mekaneak. However the Mekaneaks are regarded as just machines and not equals amoungst the races of the Interplanetary Alliance.

Lord Helter, leader of the Tagmatians curried the Mekaneaks favor in a ploy to launch a complete takeover of the Alliance. Promising them equality and recognition, the robotic race, were unwilling at first, however decided to support the warmonger, after a human from Team Earth, recklessly destroyed their excavators and knocked their racer in the elimination rounds of the Star Car 5000.

Using their agents, the Mekaneaks allowed the Tagmatians to bypass customs, bringing in armies of Shock Trooper drones through their jumpgate.

Despite not being treated as equals in the eyes of the Interplanetary Alliance, the Mekaneaks are allowed to participate in the Star Cup 5000. They are led by a robot named AI-1.

Retrieved from "https://aliens.fandom.com/wiki/Mekaneak?oldid=110530"
Community content is available under CC-BY-SA unless otherwise noted.