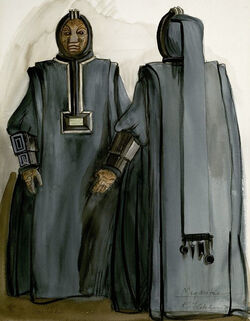 Megarites are a sapient, spacefaring humanoid species from the planet Megara.

Megarites are aquatic humanoids with four-lipped mouths that are specialized for filtering plankton, similar to a baleen whale. Their hides are tough like a rhino's.

Megarites have been described as a "poetic people" and communicate with a musical language. Their houses and artifacts are mostly constructed from jade; which exists in great abundance in their homeworld; and their clothing comes from sea animals.

Retrieved from "https://aliens.fandom.com/wiki/Megarite?oldid=153987"
Community content is available under CC-BY-SA unless otherwise noted.