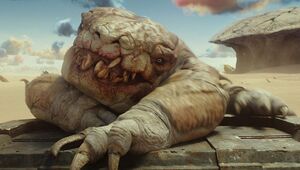 The Megaptor is an extremely dangerous species of hexapedal creatures native to the second dimension that can be visited virtually on the planet Kirian.

Megaptors are phenomenally efficient at chasing down prey. They can outrun speeding vehicles, tear down metal walls with their claws, and appear to be entirely immune to ammunition. They seem to be larger relatives of the Pit-Ghors.

Retrieved from "https://aliens.fandom.com/wiki/Megaptor?oldid=161146"
Community content is available under CC-BY-SA unless otherwise noted.