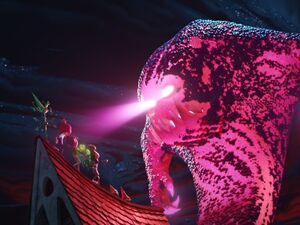 Gnome Alone
The Mega Trogg was an extradimensional behemoth that served as the main antagonist within the film, Gnome Alone. This monstrosity was a unique subspecies of Trogg.

The Mega Trogg was a most bizarre gigantic creature that is been made entirely of its own smaller kin morphed together into one, has a purple dermis as well covered in remains of Troggs. It also had beaming glowing eyes and very sharp teeth and claws matching to its own flush.

It appeared during the final battle shortly after when both Chloe and Liam along with the all gnomes had destroyed the Trogg Dimension as it had already been completed enough to be brought to the presence on Earth. But was soon ultimately killed for good once Chloe throws the plant directly into its mouth, causing it to explode in a bright flash.

Retrieved from "https://aliens.fandom.com/wiki/Mega_Trogg?oldid=164088"
Community content is available under CC-BY-SA unless otherwise noted.