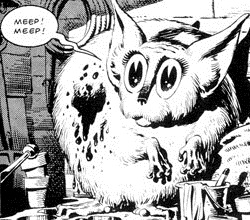 Unnamed planet in the Wrarth Galaxy

The Meeps are a sapient, spacefaring species of small furry lifeforms originating in the Wrarth Galaxy.

Meeps are widely regarded as "cute" by most humanoids. Their bodies are nearly spherical in shape and covered in white fur. They have large eyes and ears, and also possess a pouch which can be used to transport small objects. Their blood is green.

Meeps were originally a peaceful species. However, when their home planet approached the Black Sun, the radiation emitted from this peculiar star caused the race to mutate into vicious conquerors, and their ruthless empire spread over their home galaxy, causing the interstellar patrolmen known as the Wrarth Warriors to wage war against them.

By the 40th century, they seem to have established a permanent presence in the Milky Way (a.k.a. Mutter's Spiral).

Retrieved from "https://aliens.fandom.com/wiki/Meep_(Doctor_Who)?oldid=169568"
Community content is available under CC-BY-SA unless otherwise noted.