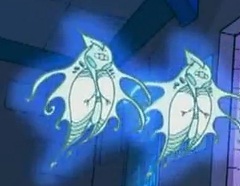 The Meekrob are a sapient species from the planet of the same name. They're made of 'pure energy' and are sworn enemies of the Irken Empire.

Meekrob are highly intelligent and can change their form at will. When they appear to Dib they quickly transform into giant flying shoes, claiming that their real appearance is impossible for the Human mind to comprehend. However, their true appearance is clearly visible to Dib before the transformation and he tells them he had no problem comprehending it.

Irken Invader Tenn was assigned to conquer Meekrob as part of Operation Impending Doom II. However, Tenn's base was destroyed because of a package of malfunctioning SIR Units, which were supposed to go to Zim.

Retrieved from "https://aliens.fandom.com/wiki/Meekrob?oldid=183079"
Community content is available under CC-BY-SA unless otherwise noted.