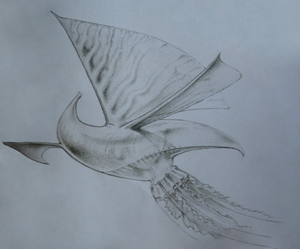 Bell is up to 15 meters in diameter. Tentacles can reach more than 35 meters.

The Medusa (Aerocnidaria aerae) is a huge aerial lifeform native to the moon Eywa. The native Na'vi known them as Fpxafaw or Lonataya. Their anatomy consist of a large bell-shaped sac filled with hydrogen, up to 15 meters in diameter; and a mass of tentacles which can be over 35 meters long which produce electric shocks strong enough to kill or paralyze most kinds of prey.

Retrieved from "https://aliens.fandom.com/wiki/Medusa?oldid=180312"
Community content is available under CC-BY-SA unless otherwise noted.