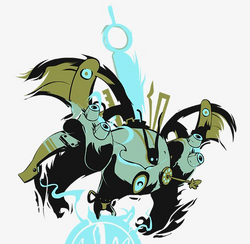 Mechasms (Meschasmes in french language) are a mechanical race featured in the Primordial Era only and whose history is tied to that of the Eliatropes. They are depicted as antagonists, although they initially lived in peace with Eliatropes.

Mechasms have almost only been portrayed through Orgonax, the only member of their race known by his name. He was seen in flashbacks during Wakfu season 2 and in the game Islands of Wakfu, where he serves as the final boss. His depictions have some variation, but in all cases he is a hulking construction of metal, with stubby legs and a very small head. His torso is particularly large and features what looks like a Feca shield. Some illustrations also show large, wing-like tools attached to his back. Other images from Wakfu season 2 episode 6 show a handful of other Mechasms with similar proportions but less detail, as well as a great number of small flying machines very similar to Noxines.

The only parts of Mechasm history that are known to us are those where they interact with Eliatropes, which can be summarized as follows. For a more detailed overview of these events, from the Eliatropes' perspective.

That was the last anyone heard about the Mechasms, but Orgonax seemed to be the only member of his race to take part in the second attack, his army comprising mostly Lu-Fu, a race from a different planet. Therefore, it seems reasonable to assume that other Mechasms have survived and may have remained on the Eliatropes' original planet.

Orgonax the leader of race.

Orgonax in at the end of videogame "Island of Wakfu".

The Mechasm drones, invade and attacking the new Eliatrope homeworld.

Mechasms battleships armada.
Add a photo to this gallery
Retrieved from "https://aliens.fandom.com/wiki/Mechasm?oldid=173018"
Community content is available under CC-BY-SA unless otherwise noted.