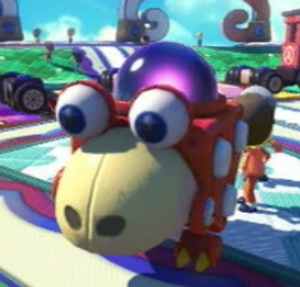 Pikmin
These Red Bulborbs are a species of Bulborb mechanically created for the popular Pikmin Adventure attraction, inspired by living Red Bulborbs and Dwarf Bulborbs.

Red Bulborbs are the most common enemy for the attraction, and much of their body is based off true Bulborbs. Most of them are the same size as Dwarf Bulborbs, though much larger ones do appear on occasion. Their AI mirrors the natural behavior of a Red Bulborb for authenticity - including their habit of sleeping during the day despite not needing sleep.

The only weakspot on the Red Bulborb mechs is the large spot on their backs which has to be struck to deactivate the mech.

Retrieved from "https://aliens.fandom.com/wiki/Mecha_Red_Bulborb?oldid=169566"
Community content is available under CC-BY-SA unless otherwise noted.