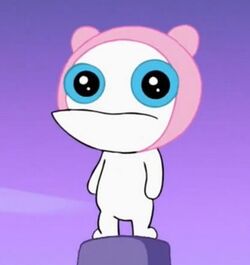 Slightly smaller than a Human

Phineas and Ferb
Meap is an alien who crashed his UFO into Phineas and Ferb's backyard. They befriend Meap, and try to help him. The only problem with this is Meap doesn't yet have his translation mustache, so he can't communicate to Phineas and his friends. Phineas, Ferb, and Isabella are later taken to a prison for alien species. They find someone wearing a mustache, and Meap takes it off, and wears it, and starts talking.

Retrieved from "https://aliens.fandom.com/wiki/Meap?oldid=186101"
Community content is available under CC-BY-SA unless otherwise noted.