Alien Species
Register
Don't have an account?
Sign In
Advertisement
in: The Maw Universe, Non-Sapient Species, Predators,
and 4 more 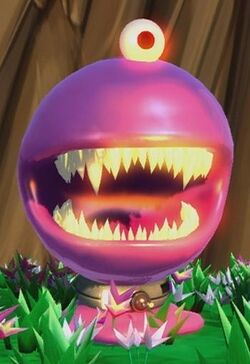 Normal: Slides along ground
Changes depending on form assumed

Twisted Pixel Games
Maws are a species of amorphous, non-sapient, carnivorous xenomorphic blobforms whom are one of the many serious threats to the galaxy, along with others such as the Xenomorphs, Zergs, Metroids and Tyranids. They are as equally indestructible as they are extremely voracious, and they can grow to insurmountable and likely without maximum sizes, and can most certainly grow larger than planets. As such, they are considered a "planet killer species". Luckily for the universe at large, this appears to be held back thanks to their species' naturally cowardly ways, and sudden movements and loud shrieks seem to frighten them off in an equally frightening display of fear.

They are notably not as intelligent as dogs, but can remember locations and are capable of low-level problem solving. Like a large number of other species, they are affected by the Teltarian's psychic headstones, and seem to become loyal due to their intervention. Another uncanny ability of theirs is to manipulate the DNA post-consumption of prey items, allowing them to "transform" into alternate physiological states, likely an evolutionary state to keep them adaptable to any environment, potentially citing either often-changing natural environments or sudden evolutionary leaps on their homeworld. They are also capable of surviving in the vacuum of space, thereby allowing any superbly lucky Maws to literally eat the planets that they are ravaging. They are outlawed and quarantined by the Galactic Council due to their massively destructive natures.

(we are currently unsure if there is more than one of the Maw species, as it shows no methods of reproduction, other than possibly dividing like an amoeba or single celled organism.)

The Gastro Form is created by a Maw upon consuming a Gastro. Their skin begins to resemble molten lava, although it appears to not be heated, as they are unaffected by water, unlike actual Gastros. Their eye is fiery and they have armored plates made of calcified material covering the back of their body. Their special ability is to breathe powerful gouts of flame that can cause high tech equipment to meltdown and malfunction or weaken and burn floral matter to mere cinders.

The Bulbous Form is created by a Maw upon consuming a Bulbous Queen. Their skin begins to glow, likely indicating its electrical conductivity. The pincers of the Bulbous have been adapted into four extendable horns along the Maw's back, which are used to inject electricity into foes, while the wings were also taken from them and allowing them to fly. Their special ability is to inject electricity into opponents - particularly the "amorphous worms" in order to use them as makeshift bombs.

The Puff-Tor Form is created by a Maw upon consuming a Puff-Tor. Due to the physiology of a Puff-Tor, this form is impossible for a Maw to take without outside intervention, such as knocking the worm-like organism out on a rock. The Maw's body becomes both segmented and pleated during the process of transformation, to allow it to inflate as if it possessed a gas bladder. The rudder-wings are also obtained, allowing the Maw to steer itself around while inflated in exactly the same way as the Puff-Tors themselves. Oddly, their mouths take on a rock-like appearance, and while this hints at the Puff-Tor's semi-subterranean lifestyle, the actual reasoning behind this change is unknown. One unique change between the originator species and the Maw is that while a Puff-Tor will simply dive into the ground, the Maw will smash into it with incredible force.

The Loofer Form is the second-strongest known form of a Maw, and, like the Beetull form, is immune to all known attacks. They attain a tuft of feathers along their head and around their neck, while the bottom of their foot becomes discolored for undisclosed reasons. However, the most unique attainment of this form is that the Maw grows a multitude of eyes - 10, to be specific. These eyes, unlike their originator's, can fire lasers.

The Beetull Form is the ultimate (known) form of a Maw. They grow the armored carapace of a Beetull, and their skin becomes segmented while the eye's pupil becomes a compound structure, similar to an insect's eye. While incredibly slow, the special ability of this form is to stampede. Oddly, the carapace covering its body is not attached to the rest of the body, and can be removed, such as if they grow too large.

Maws typically eat almost anything. However, the prey of Puff-Tors and the shells of Gloobers are particularly disgusting, therefore, frowned upon as a food item by the species.

The Maw after consuming a Gastro.

The Maw after consuming a Bulbous Queen. 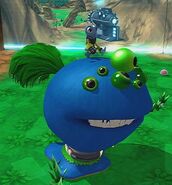 The Maw after consuming a Loofer. 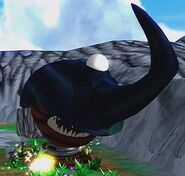 The Maw after consuming a Beetull.
Community content is available under CC-BY-SA unless otherwise noted.
Advertisement