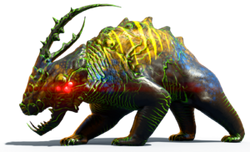 Outpost Zero
The Mauler is a large creature found on the planet Gaiya in the PC game Outpost Zero. It is, as it stands, one of the larger carnivores of the area.

Maulers are fairly large creatures. Its anatomy holds a vague similarity to that of a bear, with four sturdy legs for swift galloping strides. Its body doesn't have any hair or fur, instead having thick skin and a scale-like covering around its shoulders and head. On said heads sprouts a very large, backwards-facing horn, and three small eyes at the back of the mouth.

A fully mature Mauler has numerous glowing "veins" all across its body, all a greenish color, whereas its back is more yellow with a rib-cage like pattern.

Maulers are herd animals, with several females and offspring guarded by the largest male.

As their name suggests, Maulers fight similarly to bears, and will charge and swipe their huge front legs at attackers and intruders. Mauler bulls are considered fearless in defending their herds.