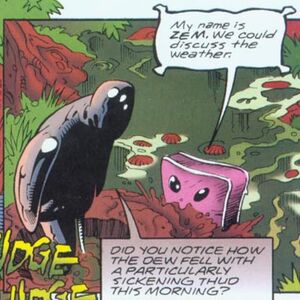 Douglas Adams
Mattresses are a sapient but rather simple-minded species native to the swamps of Squornshellous Zeta. Like their names suggest, they are mattress-shaped and mattress-sized and are actually the source of most of the galaxy's commercially sold mattresses. Every year hundreds of mattresses are hunt down, killed and dried out to become sleeping comforts. Oddly, they do not seem to mind this very much and continue to live their cheerful lives doing several mattress-typical activities in the swamp.

Said activities are identified as flolloping, globbering, volluing, vooning, and willomying, among others; all new terms invented specifically to describe the mattress behavior. All individual mattresses are named Zem, a fact that somehow contributes to their weird (lack of) attitude toward the slaughtering of their kind; this is because since they all have the same name nobody ever seems to know who has been killed anyway.

The other four planets of the Squornshellous System are all inhabited by lifeforms resembling the mattresses to a great extent; possibly suggesting a panspermia event that carried the mattresses' ancestors from one world to another within the system. Squornshellous Alpha is inhabited by giant, acid-spilling burrowing mattresses; Squornshellous Beta is mostly a desert home to sentient square cushions which take pleasure in being rubbed against people's shoulders; Squornshellous Delta is a groundless cloud planet (probably a gas giant) and inhabited by a race of flying pillows; finally, Squornshellous Gamma has been elected by many as the worst possible planet for one to crash land, due to being hot, bumpy, having solid rain and such thick an atmosphere as to make sending distress signals impossible, but most of all due to its inhabitants – 12' by 9' cushions – having a memory lapse of only five seconds, which results on them constantly asking people about their identities again and again, eventually causing visitors to die from annoyance.

Retrieved from "https://aliens.fandom.com/wiki/Mattress?oldid=195917"
Community content is available under CC-BY-SA unless otherwise noted.