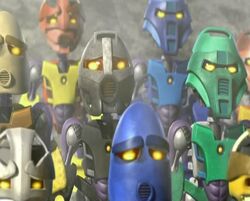 Hundreds of thousands of years

The Matoran are a species of humanoid cyborgs that are native to the Matoran Universe.

A common misconception is that the Matoran and other denizens of their world are robots. However, they are actually partially organic in nature - although to what degree is unknown. It has been confirmed that they have most of the organs possessed by purely-organic humanoids (such as a brain, lungs, a heart, etc.), and one account suggests that they may even have more than that underneath their armour.

A unique feature of the Matoran is the fact that they wear ornate masks, known in their tongue as Kanohi.

The Matoran were originally created by an alien race called the Great Beings native to the planet Bara Magna to work on a colossal robot called Mata Nui, who would traverse the galaxy and protect living things. After they had finished, Mata Nui created life-forms, called the Makuta, that would populate the world inside of his body with new life-forms. The leader of the Makuta, Teridax, betrayed Mata Nui, and put him into a deep slumber, causing him to crash into an ocean planet called Aqua Magna. After the Matoran woke him up, Teridax took control of Mata Nui's body and sent his soul back to Bara Magna. He traversed the deserts and, with the help of the natives, found a new body, and defeated Teridax. 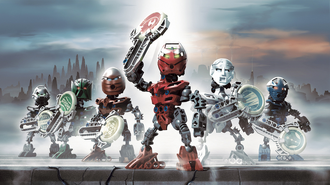 Matoran before being shrunk 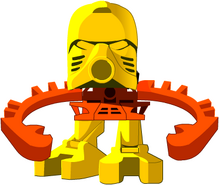 Matoran after being shrunk 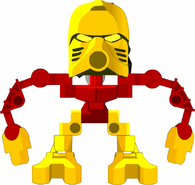 Matoran after being rebuilt
Add a photo to this gallery
Retrieved from "https://aliens.fandom.com/wiki/Matoran?oldid=189266"
Community content is available under CC-BY-SA unless otherwise noted.