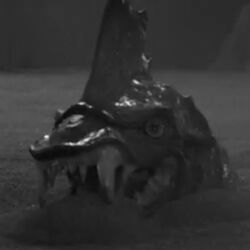 The Outer Limits
These Martian predators are an unnamed species of non-sapient, burrowing ambush predators from the planet Mars.

The Martian predators are a large, reptilian species with a serpentine head filled with sharp teeth, a fin-like head crest, two eyes, and a pair of extremely long arms which terminate in crustacean chelae.

They burrow underground within the soft sand of the Martian deserts and approach prey from below. Although they hunt alone, multiple individuals have been observed in close proximity, indicating that they're not territorial.