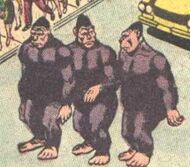 The Martian Mandrills are a species of large ape-like creatures native to Mars. Three of these beasts on their way to a lunar zoo ended up on Earth and under the control of several criminals who used their superior strenght and super breath to do crimes. Ultimately they were sent back to mars by the Martian Manhunter.

Retrieved from "https://aliens.fandom.com/wiki/Martian_Mandrill?oldid=127759"
Community content is available under CC-BY-SA unless otherwise noted.