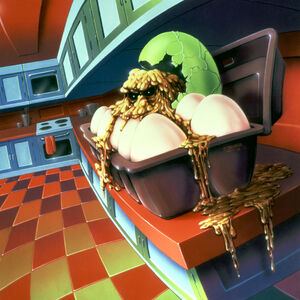 The Egg Monsters from Mars were a group of oviparous, amorphous extraterrestrials originating from Mars. They are described as resembling a pile of rotten scrambled eggs with eyes. Despite their appearance, they are benevolent creatures. The eggs arrived on Earth during a meteor shower that only hit the protagonist's town.

Retrieved from "https://aliens.fandom.com/wiki/Martian_Egg_Monster?oldid=166484"
Community content is available under CC-BY-SA unless otherwise noted.