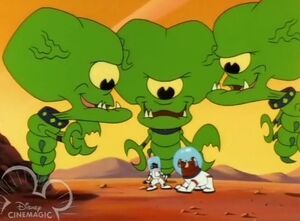 Timon and Pumbaa
The Martians are a sapient race of green-skinned cyclopean creatures which evolved from small bug-like ancestors over the course of two billion years.

Modern-day Martians are large creatures, more than twice the size of an adult Human, and move around by levitating via some unknown means. It's possible that they might have internal air sacs within their huge bulbous heads, which would account for their ability to float, but this is merely speculative.

A Martian's head is larger than its entire body, and their faces are dominated by a single cyclopean eye and a mouth with sharp teeth. Their diet is carnivorous. They've been shown to speak in unison, which, combined with the fact that they can communicate with Earth creatures, suggests they might operate under some kind of telepathic hive mind.

The body in this species is divided in four segments, other than the head and neck. The first segment is equipped with a pair of short arms ending in asymmetrical chelae. The right chela is distinct from the left one, which is visibly larger and serrated. The next two segments each contain a pair of degenerate, very small limbs, which don't appear to be articulated. Finally, the last segment contains a single, uropod-like appendage or tail.

Retrieved from "https://aliens.fandom.com/wiki/Martian_(Timon_and_Pumbaa)?oldid=184905"
Community content is available under CC-BY-SA unless otherwise noted.