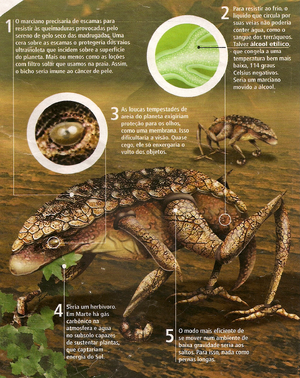 The Martian is a non-sapient creature indigenous to planet Mars.

This creature is a herbivore, feeding on small Martian plants, and has a scaly skin covered in a wax-like substance which protects it from the ultraviolet radiation. It also has a thick membrane covering its eyes, in order to shield them from violent sandstorms. Due to this membrane, however, the creature has very poor eyesight.

The Martian is a quadruped, and uses its strong hind limbs for jumping, which is a very efficient way of locomotion on a low-gravity planet. Due to the frigid temperatures of Mars, the Martian's blood contains ethyl alcohol, rather than water. Since the alcohol has a much lower melting point, it remains liquid at very low temperatures, preventing the Martian from freezing.

Retrieved from "https://aliens.fandom.com/wiki/Martian_(Superinteressante)?oldid=166481"
Community content is available under CC-BY-SA unless otherwise noted.