The Martians are small green beings that live on Mars. 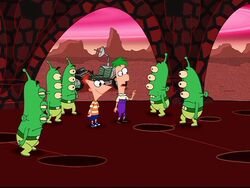 Unknown (Ferb can speak it)

Making music with different parts of their bodies
Merging together

Phinaes and Ferb
They are discovered by Candace, whom they make the Queen of Mars after she destroys a Mars Rover. They also appear during the end credits of Unfair Science Fair Redux (Another Story) where they made Doofenshmirtz's soda volcano into a king. Every part of their body appears to be a musical instrument, but they had actually never discovered music before Candace showed what it was. They also seem to worship anyone/anything who destroys the Mars rovers, possibly because they do not want the cameras spotting them. They seem very annoying to Candace, and would not leave her alone. Ferb also has the uncanny ability to communicate with them, even telling them what a Science Fair was. The Aliens quickly became interested in the idea, which results in Candace dubbing them "little green nerds."

They also have the inexplicable ability to meld into one large alien.