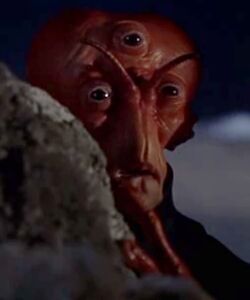 Alec Gillis and Tom Woodruff Jr.
The Martians are a sapient alien species which has built an advanced, albeit seemingly sparsely populated civilization on the planet Mars.

They're well known for their telekinetic abilities and for the Nerplex technology. The latter takes the form of a gum which, when chewed, allows the user to assume the appearance of another species and blend in while visiting alien planets.

Members of this species have red skin and a peculiar anatomy by Human standards. They have four legs and two arms which bifurcate at the elbows, generating four hands. Each hand is equipped with three long fingers with suction cups at the tip. They also have three eyes, a long trifurcated tongue, and three stomachs.

Martians require sleep periods of less than 30 seconds per day, and are capable of consuming a wide variety of substances, ranging from lava lamp fluid to ice cream. They enjoy washing their bodies with water, which is a rare luxurious resource on their homeworld.

When Martians feel depressed, they fall apart in the most literal sense, as their head and limbs harmlessly detach from their bodies; although they can seamlessly reattach them later. Curiously, the detached head remains capable of speech and still requires breathing; perhaps indicating that their lungs or equivalent organs are located inside the head, rather than the thorax. Meanwhile, the detached limbs are still able to move (although that might have to do with the Martians' natural telekinesis) and they can still feel and react to stimuli to their detached parts.

Even while taking the form of other species under the effect of Nerplex, Martians can still extrude a pair of antennae from their heads. These have been identified as biomechanical implants and allow them to access other abilities such as mimicking the appearance of a specific individual, as well as becoming invisible.

Martians are familiar with a variety of species, including Humans, and have developed specific Nerplex devices to assume their appearance. Their technology also includes living, sapient suits and the ability to shrink objects such as spaceships, along with their occupants.

Dr. Elliot Coleye transformed into a Martian.
Add a photo to this gallery

Retrieved from "https://aliens.fandom.com/wiki/Martian_(My_Favorite_Martian,_1999)?oldid=199278"
Community content is available under CC-BY-SA unless otherwise noted.