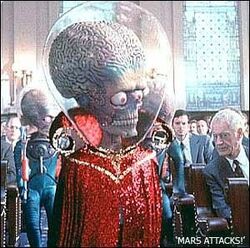 The Martians' biology is similar to Humans except that, instead of breathing oxygen, they breathe nitrogen. They are also much skinnier and paler than humans. Their heads are large and are mostly composed of a teal-tinted exposed brain while their faces are skull-like and possess big eyes with red pupils. Their "blood" is a bright green color and somewhat slimy.

The Martians possess sensitive hearing, as they cannot stand the sound of yodeling, superficially Slim Whitman's "Indian Love Song". Just listening to it can cause their heads to explode.

When the Martians came to Earth, they began with a peaceful approach until they saw a dove and immediately annihilated it with their ray guns. They immediately began attacking people, sparking a war between Mars and Earth.

At first, US President James Dale thought that the reason why the Martians were attacking was because they had a cultural misunderstanding with the Earthlings. Over time, he later discovered that it was not the case. Once a weakness involving yodeling music was discovered by Richie Norris and his grandmother Florence, all Martians on Earth were killed and the planet was saved.